Theological Insights from a Modern Perspective

An Epiphany on Theophany? 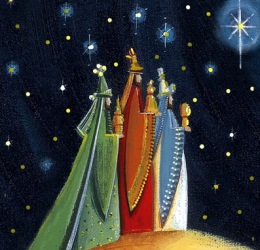 January 6, a holy day in West and East, but do we both celebrate the same thing? Not at all. It’s unusual for East and West to share a holy date, but to celebrate different events (especially when both churches celebrate the events) on that date tends to lead to confusion. So, what are Epiphany and Theophany, and how do they differ?

Epiphany is the Western church’s celebration of the arrival of the Three Kings to welcome and pay homage to the new born King of Israel. Newborn is a relative term, in ancient Israel a child was considered to be a new born until they no longer suckled, and could consume food on their own. Based on this is why Herod had all children in the area, under the age of one, murdered, not only didn’t he have an exact date, he didn’t even have a close one. The arrival of the Magi was a powerful sign that not just a king, but a historically important king was to be born.

Over the millennia scientist have tried to identify a major stellar event (such as a supernova) that would have occurred at the time. In ancient times kingdoms were assigned constellations, the kingdom of Judah was assigned to Leo as the lion was the sign of kings. The planet Jupiter was considered the astrological sign of kings. The appearance of Jupiter in the constellation of Leo would indicate the birth of a major king for Judah. Since Judah’s kings were tied to Bethlehem (the City of David) it was a logical destination for the Magi. Once there they would, naturally, have inquired about male children born at the time the star (Jupiter) indicated. They would then have sought out the babe to pay their homage.

The gifts they bore were gold, frankincense, and myrrh, but why these? Significance. Everything done was of special significance to the newborn king. All three were precious commodities, and quite expensive, not something given to just any newborn.

So, in these three gifts we have symbolically recognized the divine king who would willingly surrender his life for his people. The Eastern church combines the celebration of Epiphany with the celebration of the Nativity, both events recognizing the birth of the newborn king.

Theophany is the celebration of the Baptism of Jesus in the Jordan River by John the Baptist (the Forerunner in the Eastern church). The Baptism signifies the start of Jesus’ ministry on earth, the Eastern church celebrates this on January 6th, and it is one of the major Feasts of the church (there are twelve), unlike in the west where most churches have reduced it to a side note. Theophany (translated from Greek) means “the appearance of God”, this occurs threefold in Christ’s Baptism: first when the voice of God announces that Jesus is His beloved son; second when the Holy Spirit appears in the form of a dove; and, third, in the person of Jesus, now revealed to the world as one of the  three persons of the Trinity. To the Eastern church this is a feast on the level of the Nativity and Pascha (Easter) for through it we are introduced to the reality of the Holy Trinity.

On the first day of Christmas…