Theological Insights from a Modern Perspective 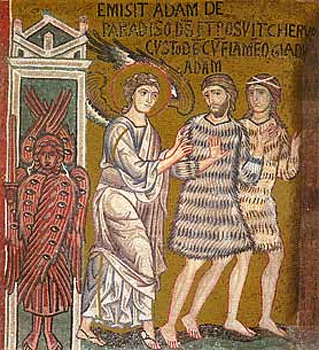 Everything mankind has to deal with started with, and because of, Adam and Eve. According to Genesis (1:26) man was made “in our image (εἰκών), after our likeness (ὁμοίωσις)”. Image and likeness are the two words used to describe the original condition of man at the time of their creation.

Image refers to a physical resemblence, real or imagined, an example of the latter are the graven images the Hebrews made in the desert when Moses was on the holy mountain. Here it is being said that Adam and Eve were made to resemble their image.

Likeness, however, appears only three times in Sacred Scripture: in Genesis as stated above, in Psalm 57:4 (58:4) where the speech of the wicked is said to be of venom like the venom of a snake. This is not a physical comparison, but one of similarities in essence. The third occurrence is in Daniel 7:5 where Daniel is comparing the second beast in his dream, saying that it acted like a bear; again this is not a physical description, but a comparison as to how it acted. Drawing from these two uses we come to the understanding that when it is said that Adam and Eve were made in the likeness of God that they were made with their essence. Of most importance here is that Adam and Eve were given the imortality of the heavenly beings, a physical life without death. We know that because it was the curse God would lay upon them for their disobedience: “(Gen 2:17) but of the tree of the knowledge of good and evil you shall not eat, for in the day that you eat of it you shall die.” Their dying was not in the original plan which God had for man.

The Eastern church, from the 4th Century, has taught that after they sinned God removed His essence (likeness) from Adam and Eve, and through them from all of mankind. This is the result of that first sin, that man no long contains the divine essence, but retains His image. This is the summation of the Eastern church’s belief on orignal sin, that Adam and Eve committed the first sin, and that because of that man lost the likeness of God for all time. Jesus came and restored to man the likeness, but only after we pass from this life. This, then, is the beginning of man’s journey to the afterlife, more to come in part 2.